A Newt or Not A Newt?

In this post, I will briefly sort out the different salamanders that occur in the Santa Cruz Mountains of California. This info should answer some of the questions that have come up so far and will help with the odd twists that are revealed in upcoming posts of the Mystery of the Red-Bellied Newt series.

First, some tips for distinguishing reptilian lizards from amphibious salamanders. Both lizards and salamanders have an elongated body, four legs and a long tail. Lizards have dry skin and scales. Salamanders have moist skin with no scales; their skin can be either smooth or bumpy depending on the type of salamander and their life stage. Lizards prefer warm or hot weather and will bask in bright sun or on warm rocks to adjust their body temperature. Salamanders like moist conditions. Salamanders can live all or part of their lives in ponds or streams, or take up residence in shady, damp locations under rocks, logs or leaf litter instead.

Lizards are out in the day and sprint after insect prey. Salamanders tend to be more secretive and hidden, although several of our local, brightly-colored sally species brazenly reveal themselves during the breeding season. Salamanders are slow on land but they morph into pudgy mermaids in water. Lizards have eggs with shells and newly hatched, they look like small versions of the adults. Salamander eggs are enclosed in jelly-like material and their young may either look like minnows if they hatch in water or like minute tailed tetrapods for those species that hatch in moist terrestrial locations.

Our most common local lizards in the Santa Cruz Mountains of California are the western fence lizard and the two closely related northern alligator lizard and southern alligator lizard. I'll share a few photos of these reptiles and their distinct reptilian traits for comparison and then move on to the salamander vs. newt question.

The distinction between salamanders and newts can be murky.  Remember this:


Newts are a type of salamander that have rough skin.

Taxonomically, whether they carry a common name like mole salamander or firebelly newt, all salamanders are in the order Caudata of the amphibians. One of the several families in that order, called Salamandridae, consists of two informal subgroups called the "true salamanders" and the newts. The most obvious distinction to a casual observer is that newts are the only type of salamanders that have rough skin (Larson et al. 2006, 2007).

However, common folk have been naming animals for thousands of years and haven't always followed the more recent strict rules of taxonomy, so what is called a newt and what is called a salamander isn't always consistent with this rough skin rule. In general, people have tended to apply the appellation "salamander" to those salamanders that live all their lives on land, and "newt" to those salamanders that start their life in water and then transform into a terrestrial adult form.

It's interesting how this common way of naming salamanders reflects the two most common reproductive strategies of salamanders:
Of course, there are exceptions to how some salamanders reproduce (with some very odd examples) and how people have named their local salamanders.

In the Santa Cruz Mountains, here are some of the most frequently encountered salamanders and newts with their reproductive strategies and common names.

The yellow-eyed ensatina, arboreal salamander and California slender salamander are lungless salamanders (family Plethodontidae) which live entirely on land in a variety of moist terrestrial habitats or the moister microhabitats of drier places. They breathe through their skin and the linings of their mouth and throat. Eggs are laid in moist crevices in soil, animal burrows, and tree hollows, under fallen logs and beneath loose bark. Peeking under logs and rocks in wet forests is a common way to find these terrestrial salamanders.

California giant salamanders split their life between cool streams and adjacent shady forests. Eggs are laid under stable submerged rocks and logs in streams, and the aquatic larvae either take two years to mature, or they may remain for years in a neotenic form (larval-like streamlined body and ability to breed) in streams that have a cool flow year round. In the Santa Cruz Mountains, I often see California giant salamander larvae as extremely fast gray shadows dashing away in small forest streams. The terrestrial adult can get to be 12" long and with a large mouth will prey on many suitably-sized creek and forest animals including other salamanders. So, if these giants split their lives between water and land, why aren't they called newts? Because they have smooth skin.

That leaves the three coastal newts of the Taricha genus. True to both the taxonomic definition and the common practice of applying the term newt, these orange-red newts have rough skin and a split aquatic/terrestrial life. They lay eggs and their larvae develop in water over one season. Adults live in moist terrestrial environments but return to ponds and streams to breed in the annual rainy season.

Dr. Victor C. Twitty of Stanford University was the first to recognize that California actually had more than one Taricha newt species. In a desperate attempt at the end of the breeding season to collect more salamander eggs for his embryology studies, he followed a lead to the Ukiah region of northern California where he was able to find and collect salamander eggs in a stream. When the larvae hatched out of the collected eggs (presumably in his lab at Stanford), he recognized striking differences in the pigmentation and other features of the Ukiah larvae compared to larvae hatched from eggs collected from the hills surrounding the Stanford campus. Stanford is in the Santa Cruz Mountains. With two more collecting seasons throughout his new home of California, Twitty sorted out the various adults, larvae and eggs into three coastal species* currently known as:

In summary, a newt is not a newt when it is a salamander with smooth skin, at least for most of the year when it is adult in the State of California and sometimes in other places but not always because people are imprecise. If you are trying to figure out newts in the Santa Cruz Mountains, just start by referring to the descriptions above or references below. And have fun, they are slippery creatures.

There are other lizard and salamander species, subspecies and intergrades that may be found in the Santa Cruz Mountains but which I do not commonly see and therefore have not included here such as the Skilton's skink, horned lizard, California tiger salamander, Oregon ensatina and Santa Cruz black salamander.  See the list of "Reptiles and Amphibians of the San Francisco Bay Area" at California Herps for details with current names and ranges.

This post is the fifth in a series on the discovery of red-bellied newts in the Santa Cruz Mountains of California. To start at the beginning of the series go to Mystery of the Red-Bellied Newt.

*Eventually, a fourth species, the Sierra Newt of the Sierran foothills, Taricha sierrae, was recognized as a separate species from the similar looking California or coast range newt.

Eyewitness Amphibian, Dr. Barry Clarke, DK Publishing, Inc.  - Check out the Eyewitness series of books.  They have excellent photographs interspersed among essential facts and interesting sidebars.  I often use the books in their natural history series as a way to get familiar with general aspects of a topic before diving in further. 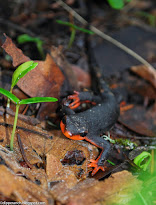